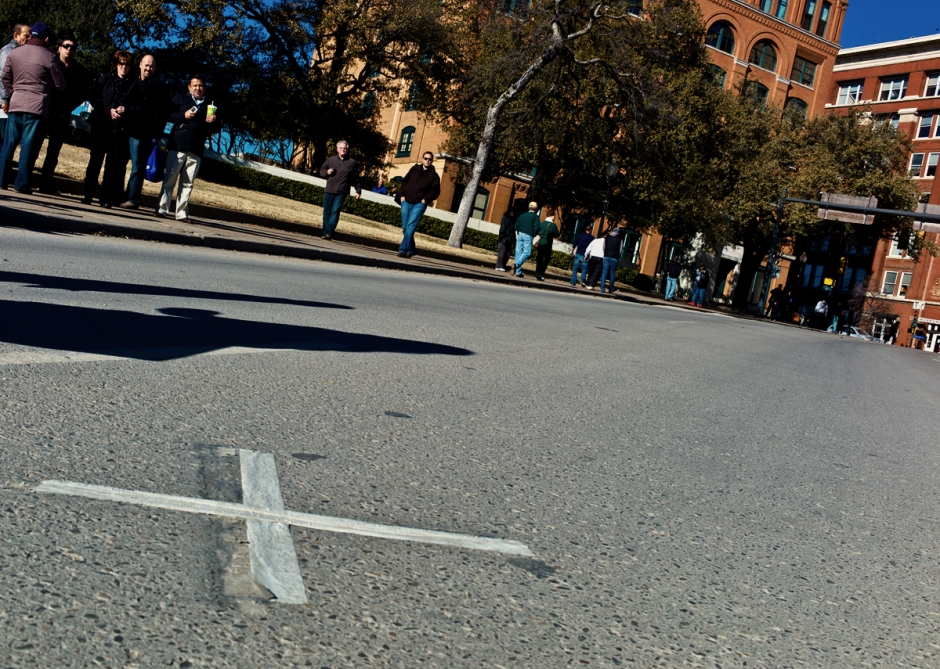 A view of the sniper’s nest from the spot where JFK died.

I’m just going to link to and excerpt today from a must read article in the New York Times by Sam Tanenhaus and a should read piece in the Dallas Observer by someone who must not be invited to all the best parties in Dallas, Jim Schutze.

NYTimes: In Kennedy’s Death, A Turning Point for a Nation Already Torn

It is inspiring, but also deflating, to see and hear again (and again) the handsome, vigorous president, the youngest ever elected to the office, as he beckons the country forth to the future, to the “New Frontier,” and its promise of conquest: putting a man on the moon, defeating sharply defined evils — totalitarianism, poverty, racial injustice.

This, we have been reminded, was the dream Kennedy nourished, and much of it died with him, when the sharp cracks of rifle fire broke out as his motorcade rolled through the sunstruck streets of Dallas. With this horrific, irrational deed, a curse was laid upon the land, and the people fell from grace.

But this narrative and the anniversary remembrances have obscured the deeper message sent and received on Nov. 22, 1963. In fact, America had already become a divided, dangerous place, with intimations of anarchic disorder. Beneath its gleaming surfaces, a spore had been growing, a mass of violent energies, coiled and waiting to spring.

The Dallas Observer: Still JFK Crazy After All These Years

Apparently I have written more about the upcoming 50th anniversary observation of the Kennedy assassination than anybody else in town, or else I have written crazier stuff. One way or another I have become a top phone call for out-of-town journalists, filmmakers and other seekers of something to say about the murder of JFK.

My real reason for passing on that fact is to put a chill in the bones of the old rich people running Dallas’ JFK 50th affair. I can’t imagine I would be their first choice for ambassador.

But talking to the visitors has also been interesting for me, providing me with a window on how people outside the city view Dallas and the assassination a half century after it happened. Most of what they really want to talk about is way outside the circle of thought here at home.