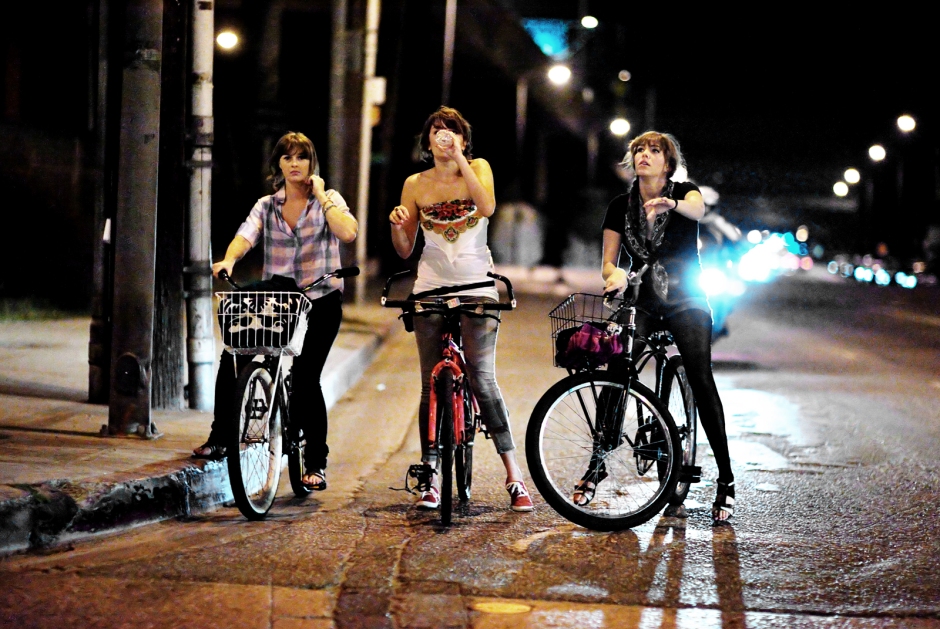 I took this shot about five years ago and have never really shown it to anyone. I think the reason for that is that I never thought I could adequately explain how amazing it is to me. I guess I’ve felt it needed explaining and I guess I’m finally in the mood now to try.

No part of the West LA area is really that bad. But this is nearly as gritty a corner on the Westside as there is. It’s directly underneath the intersection of the 405 and 10 freeways, which is to say, the junction of the two busiest roadways in the United States of America. There are homeless people camped out under the overpasses and exit ramps. It was fairly late in the evening. The feel there at that hour is probably worse than the reality. Or vice versa. Who really knows?

I travel by that way innumerable times a year. At any hour, but especially late in the evening, the very LAST thing you would expect to find there is three truly lovely sisters, possibly triplets, on bicycles, cooling their jets waiting for the light to change. Trust me, you just don’t see this in LA at that hour. In most of Los Angeles, they kind of roll up the sidewalks. That’s a common complaint of people from New York and elsewhere who have moved to LA from cities with a more active night life.

I’m a man. The car was being driven by my lady of 38 years. We both were like, DID YOU SEE THAT? And then she asks, Did you GET it? I don’t know how I got it. The green light was with us and we never even slowed down going through the intersection. I probably was pre-focused to some degree and the amazing Nikon D3 sang the song. I put the camera to my face, framed the ladies and slammed down the shutter release. It just happened. It’s one of those moments that makes me so happy that I had a camera, not to create some work of art or anything like that, but just to capture the natural beauty I witnessed there at the grimy and otherwise unsightly corner of Sawtelle and Pico Blvds that night.

Alone, a younger man, I would have probably slammed on the brakes and went down the line asking for their hands in marriage. Because these sisters are not afraid of the dark or probably anything else. I thought maybe there was someone filming them, like a reality show or something. Truly gutsy young ladies. And reason #90454 I’m glad I never had children.